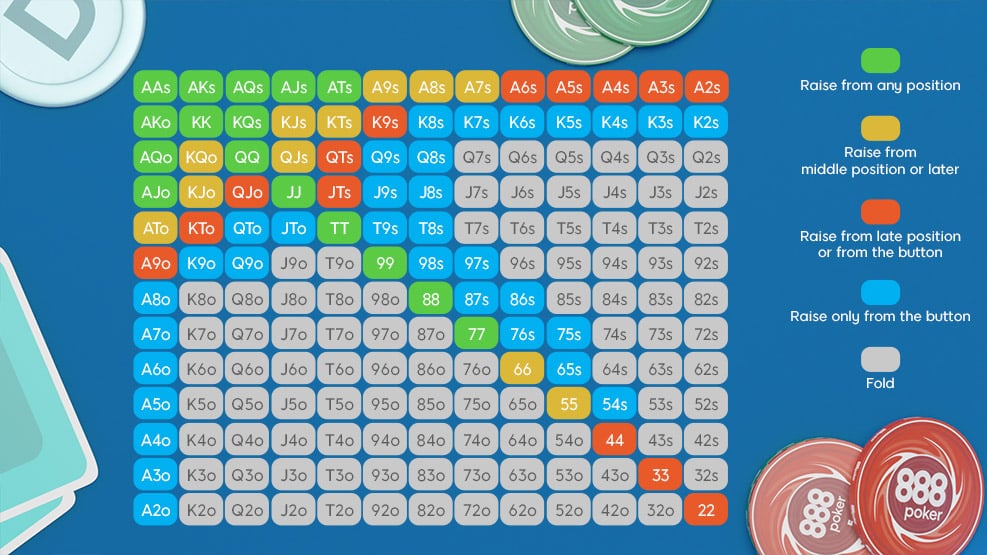 Texas Hold’em is a great game however you play, whether you play in the flesh on the casino floor, or if you play Texas Hold’em online for real money. Whatever the case, it is a fantastic game, and it is also a game that rewards good play.

As is with any gambling game, there is a bit of luck involved, however, no matter what, a good player will typically always beat a bad player. Just make sure that you know the rules of the game to increase your chances of getting a win.

So, today, we are going to help you become an even better player, by giving you some top tips for Texas Hold’em.

The best position in Texas Hold’Em is on the button. As when you are on the button you are the last person to act in three out of four butting rounds- after the flop, the turn, and the river. When it is your turn, you will have full knowledge of how many other players are still in the hand, and you can make a better informed decision on how much to bet. This is much better than being in the small blind. In this position, you would be the first person to bet after the flop, turn, and river. Although you can turn this to your advantage by playing aggressively, it is much better to act last.

Top tip #2. Concentrate on other players too.

We are not saying you should ignore your hand, do not ignore your hand. But it can be easy to get TOO caught up in your hand, and you  can end up losing sight of the other players. You do need to be aware of how many chips they have, what cards they might have, and what their best hand could be given the community cards that you share with everyone else.

Watching player trends can also be helpful. You should try to determine who bluffs and who plays a tighter game. If a player has consistently never bet more than $10, and then they are suddenly playing double, triple, or more of that, then you should be wary. It is a good indication that the player will have a solid set of cards.

Don’t let your opponents see the flop for free. At least raise by the minimum bet. Beginners love to see the flop as cheap as they can, but it is dangerous to let them do this.

If your hand is an A-K, and the other players have a 7-4 and a 10-5, you should be able to get both of them out of the hand before the flop, but if you let them see the flop just for the price of the big blind, you could end up in a disaster. In this situation a 10-9-8, would be the worst thing to happen, as you have nothing, and one of your opponents has an open-ended straight, and the other a pair of 10s, so you could have wasted a great starting hand.

As a beginner, folding a hand after the flop is hard. You have already put money into the pot and so you are tempted to see it through to the end. However, this thinking can cause you to lose a lot of chips and end up losing more money just because you stubbornly did not want to fold after the flop. Let it go, and if you gotta go, you gotta go, don’t stay around to lose more money if you can just fold out of it. Part of being a good poker player is understanding when it is best to just fold.

Playing smart on the turn and river is important.

If you are holding a draw after the turn, try to get to the river as cheap as possible. Similarly, if you are sure you have the best possible hand after the turn, make it expensive for opponents to see the river.

If the community cards include a pair, always remember you might go up against a full house.