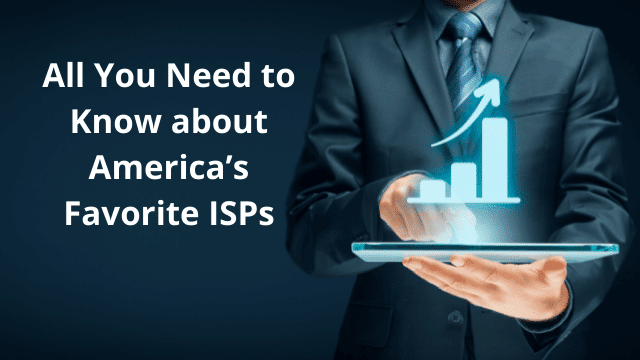 Shopping for ISPs is just like shopping for your wardrobe online. You scour the markets for the perfect article that fits your physique and gives you a chance to be a part of the ongoing fashion trends. There are certain factors you focus on while comparing one brand against the other, and this analytical method often lands you with the best outfits for the season. Similarly, when you head out to search for the perfect internet service providers in your area, you keep certain evaluative points in mind. These critical elements include:

So on and so forth. By judging ISPs against this yardstick, you end up with the finest entries in the market. Speaking of the finest providers, the following are America’s chosen ISP champions for the year 2020-21. Check out what makes them special, and why are they deemed as the best upholders of customer experience.

Charter Spectrum is one of the top three cable providers in the US and offers a refreshing take on cable internet speeds. It does not weigh the customers down with annoying data caps, nor does it bind them with restricting contracts. Spectrum stands for consumer freedom, and its services are available to the folks in Hawaii – a state that does not get much attention from the ISPs. Therefore, its 59 out of 100 scores on the American Customer Satisfaction Index looks justified.

Verizon Fios first appeared on the telecom scene back in 2005 and became one of the first-ever internet service providers to supply FTTH (Fiber to the Home) internet speeds to residential consumers. As of today, this ISP has a huge following across 9 states, including New York and New Jersey. Verizon’s fiber internet plans offer symmetrical speeds ranging from 100 Mbps to 1000 Mbps, and one of the best things about this provider is that it over-delivers on its promised tiers. The American Customer Satisfaction Index ranks Verizon Fios on the top with a 70 out of 100 scores, and rightfully so.

CenturyLink is one of the best DSL internet providers out there, and proudly highlights the most transparent SLA agreement you can find in the market, making it ideal for business owners. Its Price-for-Life guarantee is reassuring and its consistent coverage across 50 US states is commendable. CenturyLink internet plans is are not only perfect for light users with tight budgets, but they but it also caters to the needs of the high-end class. That is why the American Customer Satisfaction Index places it in the 59th position, which is good if you ask me.

This telecom conglomerate has an incredibly optimized website and the most tantalizing discounts you will find in the market. AT&T is famous for its DSL internet, its Fiber division, its DIRECTV & U-Verse TV sub-braches, and its stellar Wireless service – all of which are available to people living in Texas, Missouri, California, and 20 other states. Internet speed wise, you can expect to enjoy tiers starting from 10 Mbps and going up to 1000 Mbps. According to the American Customer Satisfaction Index, AT&T manages to come in second place, and with a 69 score.

Optimum is often regarded as the fourth fourth-largest cable provider in the US by coverage area, delivering first-class internet speeds to both residents and businesses. Because Altice acquired this brand back in 2016, its coverage only extends to four major states, including Connecticut, New York & Pennsylvania. However, due to its operational efficiency, Optimum scores 63 out of 100 on the American Customer Satisfaction Index, promising great things to tech-savvy users of today.

Comcast rules the telecom market with internet speeds climbing up to 2000 Mbps! Its plans are diverse and its pricing is thoughtful. Xfinity’s coverage extends across 39 US states, making it the largest cable provider in the US by area, and its TV, phone, mobile & home security services are spectacular, to say the least. American Customer Satisfaction Index gives a greater-than-average 61 out of 100 scores to this cable ISP, so you should give it a shot.

Being the third third-largest cable provider in the United States, Cox symbolizes progress and growth. It had a humble beginning, but over time, this ISP refined its infrastructure and improved its services, and now it delivers 108% of its advertised internet speeds. American Customer Satisfaction Index gives Cox a 60 out of 100 ranking, which spells only good things about the provider.

This list of America’s favorite ISPs, categorized based on ACSI scores, says a lot about the needs of people and the efforts of providers in fulfilling those requirements. If any of these recommended providers offer their services in your area, you can safely give them a go and they will not fail to satisfy you.