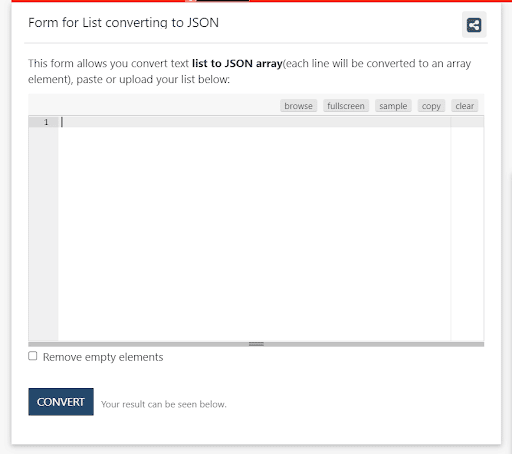 Lists are textual data separated by line breaks. Thus, each new line will be converted into a separate element of the JSON array.

In the ordinary life of developers, webmasters and other IT professions, there are times when they are faced with the need to convert lists to JSON or any other format for further manipulation of this information.

JSON (JavaScript Object Notation) is a textual data exchange and storage format based on JavaScript. But at the same time, this format is used in all programming languages and is mainly used to transfer data between the server and the client.

To do this, you need to go to a site with an online tool for converting a list to JSON. Paste your list into the editor and click on the “Convert” button.

And you will receive your JSON instantly.

In fact, only a small part is described here where you may need to convert lists to JSON or to some other format.

Let’s see how the tool works with a real example, let’s say we have a list of emails that we want to convert to JSON.

After the transformation, we get the following JSON:

As you can see, there is nothing difficult and very easy to use in this, and most importantly, you do not need developer’s help in order to convert your list to JSON.

Converting lists to JSON can be replaced by converting CSV to JSON, because a list is the same CSV itself, with only one column and no separators.