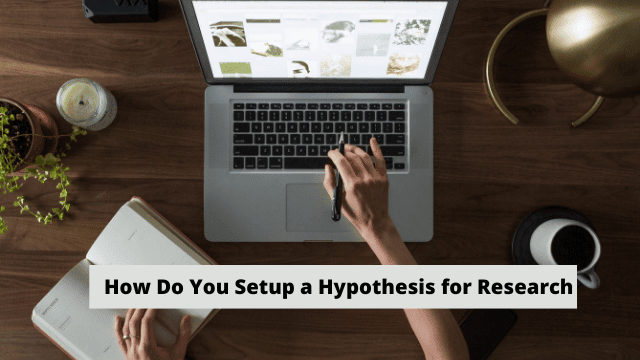 A hypothesis is an assertion that describes the predictions and logic of your study. It may also be thought of as an “informed guess” about how the outcomes of your scientific investigations will turn out. A well-written hypothesis is a crucial aspect of the scientific process.

However, it is not always easy to find the right words, even for the simplest ones. In need of a hypothesis writing guide for your next research problem? You’ll find an outline of the many hypotheses, as well as ways to write them in six steps below.

Hypothesis: What is it?

Our list of 10 key terms for college success includes the phrase “hypothesis,” which describes the first step in the scientific process. Simply said, it’s a prediction of how your experiment or study will turn out based on what you’ve already seen.

Consider the case where you discover that your plants grow faster when they’re watered regularly. In this scenario, your hypothesis may be something along the lines of “plants grow better when they are watered consistently.” After that, you may conduct tests to confirm or refute your theory. For instance, you might separate two plants and water one of them while ignoring the other.

Hypothesis-testing language often centers on talking about the things you’re changing. In mathematics, a variable is any item that can be seen, including but not limited to objects, events, ideas, and numbers. An independent variable is one that does not rely on another for its value.

A research paper’s hypotheses are crucial since they outline the path and structure of the ensuing research procedures. Whether your hypothesis was supported or refuted should be stated explicitly in the paper’s introduction and/or abstract, since this is what the reader cares about most.

In Six Steps, Write A Hypothesis

The process of how to write a hypothesis can be broken down into these six steps:

Some of the greatest scientific advances in human history have been motivated by simple human curiosity. As a result, it is helpful to begin by contemplating various aspects of your environment. This state of affairs begs the question: why? What are the origins of the things you observe? If at all possible, select a study subject that piques your interest.

As a further step, you should investigate your topic’s history. The amount of prior knowledge required is determined by the task at hand. A fast solution might be found by doing a web search, or it can take many books to read. There’s no need to try to confirm or reject your idea just yet; instead, gather the data you’ll need to do it on your own.

Do it with an if-then clause.

When expressing a hypothesis, it assists to state it using an if-then pattern, such as, If I nurture a garden nearly every day, it will flourish faster. When dealing with several variables, this format might get complicated. In any case, it is a solid approach to articulating the hypothesized connection between causes and effects.

Obtain evidence to back up your hypothesis.

A hypothesis is a tool, not a goal in itself. It is the conclusion that must be reached first in every scientific study. Once you have a working hypothesis and have decided on which variables to test it with, you can begin conducting your experiments. Ideally, the facts you gather will lend credence to your theory. However, if your investigation reveals that your hypothesis was incorrect, that’s okay too.

Last but not least, you should document your study in a report that others may pursue. This calls for certain writing skills, which are quite distinct from laboratory expertise.