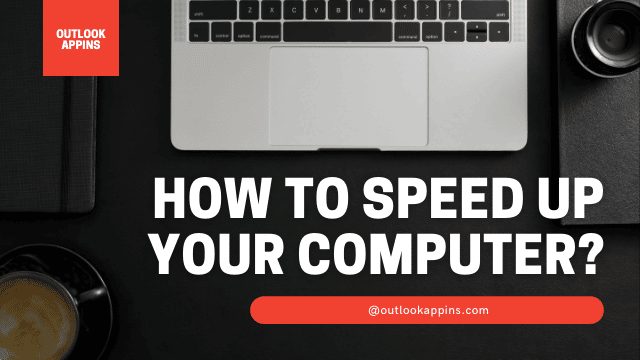 How to Speed Up Your Computer The slow computer is a problem that sooner or later affects most of our computers; there are two main causes: low RAM and slow Hard Disk. Let’s see how we can Speed ​​up your computer with some simple tips.

RAM is one of the most important computer components, it allows the CPU to process data quickly; the greater its quantity the more things our computer can do before slowing down using the harddisk as “additional RAM”: on a computer with little RAM or where heavy programs are run, when the available RAM memory runs out, the

processor is forced to use the hard disk instead, which vice versa is the slowest part of the computer. The consequences of a PC with little RAM are two: the computer becomes slow in startup and is slow in responding to commands, so much so that in some moments it almost freezes.

The hard disk, on the other hand, is the slowest part of a computer, which fortunately, in new PCs, is replaced by the faster and more efficient SSD. It is important to note that, due to its physical nature, a record is made up of a head that reads data (like a turntable); any hard drive, even the best, will still be slow to load.

On computers with hard drives, continuous loading and a very slow start can therefore occur. The SSD-type Hard Disks are instead devoid of mechanical components and therefore manage the exchange of data in a much faster way.

At this point it is easy to deduce that to solve the slowness problems it is necessary to intervene by changing or increasing the RAM of our PC and installing a Hard Disk like SSD. However this may not work for very old

computers or computers that have these non-replaceable components. In these cases, a professional can find the right solution for us, advising us which components are best to replace, thus optimizing our budget.

Another option is that you can use a device like Xtra PC to speed up your slow system. These Xtra-PC reviews will tell you more about this useful device.

However, there are some small procedures that we can implement to make our computers faster in normal daily operations, let’s see some of them.

Open Control Panel, go to Programs and Features to view all installed programs. Sort them by Author and uninstall, one by one, all the programs that you do not recognize, except those whose author is Microsoft, Intel, AMD, NVidia or other hardware manufacturers as they are probably drivers. Instead,

remove almost all programs whose author is the brand of the computer, for example Acer, Asus, Lenovo, HP. The only ones to keep are the programs you actually use, such as the Office package, the Adobe one, etc.

Then remove all programs pre-installed by the manufacturer, if the PC was sold with the system ready, including the antivirus. In fact, remember that in Windows 10 there is already the Windows Defender antivirus, just as good and safe.

Controller and delete the programs set to start automatically

If we have uninstalled all the programs we are not using, restarting the PC should already notice an improvement in speed, because many of those programs were running automatically. A program that starts automatically when the PC is turned on, not only slows down Windows startup, but by staying in memory constantly,

it makes the computer slower, occupying a portion of the RAM. Even a program that we use often, if it is not a system driver (such as the video card manager or the audio program), is worth taking it out of autorun.

In Windows 10 and Windows 8.1 this thing is really simple because you just need to open the task manager (press the CTRL + Alt + Del keys together), press on more details and then move to the Startup tab. Select, one by one, those indicated with high or medium impact and then press the Disable button.

After uninstalling the programs, the computer leaves a lot of junk as the removal processes fail to erase all the files and data created by the various software. The same system also creates junk during its use and during the use of the internet, in the form of temporary files.

It is therefore essential to tidy up and delete these useless files using the disk cleanup tool, pressing the disk icon with the right button and going to the properties, or using a program like Ccleaner in its cleaning and problem correction functions.

Repeat these operations at least once a week.

Adjusting visual effects by limiting graphic animations is a good trick to speed up a slow computer, especially if it is old or cheap. Then go to Control Panel> System> Advanced system settings (link on the left) > Advanced tab>

Settings button under performance. Here you can use the Custom option and disable a few options by testing or directly put the settings for better performance, even if you will give up a bit of aesthetics.

Generic techniques to speed up PC