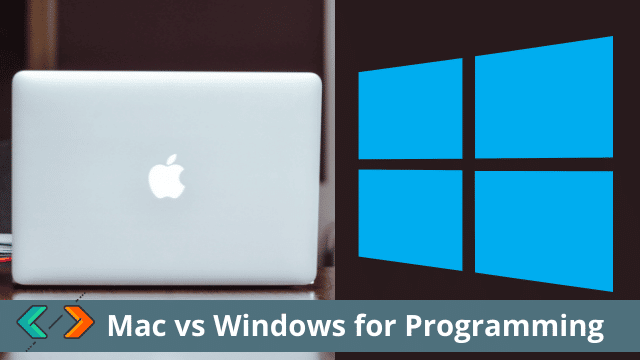 If you are thinking about a programming career, your first thing to do is to get to know about the basic equipment required. Many novices think that their studying computers and laptops will fit coding, but it is not always like that. You will need a computer that has a boosted performance, and much memory to deal with all your programming files.

The second consideration falls for the operating system that will fit your particular case. Here come two options: Mac or Windows? Looking ahead, both operating systems are good for programming, but they have their distinctions, and you may need one particular depending on your goals.

Let’s start with the Mac. MacOs is a Unix-based OS. Unix and Linux OS are known to be free, and open-source. Thus, Apple decided to take the free operating system, modifying it a bit by complying with its UI/UX principles, making it user-friendly while simultaneously charging high prices. So, Apple literally focused on copying Unix but making it authentic with lots of features and changes. It helped them to never compensate the original developers and pay zero loyalties.

Then, Windows. Microsoft, a Bill Gates creation, has been linked to some kind of dark history with many ups and downs. The developers wanted to develop their own GUI or simply called Graphical User Interface. The first Windows released in 1985 was based on DOS with its own flagship programming language BASIC. Through the years, there were many changes and modifications.

To not make everything complicated, both operating systems are primarily recognized by their designs. If you love Apple and have an iPhone, you are most likely to crave Mac for your programming. If you use Android and need more free and simple in usability devices, Windows will be a go-choice. Then, everything caters to prices. As you may know, Macs are much more expensive than Windows laptops. So, you should also base your pick on the existing paying capacity.

Which One to Choose for Programming in 2021?

Do You Want to Run Linux/Unix?

Regardless of the programming language or OS you choose for your occupation, Linux and Unix will be two important for your skills. They are operating systems known for stability, security, and, of course, flexibility and adaptability. On some occasions, you will need to code for them and build software for both. So, here, everything is easy. Both Mac and Windows can run Linux.

What Do You Want to Program?

Now, you should also consider what you plan to program for, or what you need to develop. If your company, employer, or freelancer needs to program for macOS only, you won’t cope with this task by using only Windows. And, vice versa – if you do not deal with any Mac software, but focus on Microsoft, you should choose Windows.

Let’s be completely honest, Mac is commonly used because of the brand, and design. People love how their Mac laptops look, and it is just a sign of prestige. It means that you earn a lot, and can afford such an OS. Beyond that, you should understand that with macOS, hardly everything requires payment. You cannot simply listen to free music while programming. While Windows is a more affordable option.

As was hinted above, Mac is not a cheap option. By modifying the UNIX OS, and simply inventing pretty nothing in the functionality except some features, they still manage to put huge price tags on their devices. You can contribute to a Mac laptop for approximately $2,000 if you need one with boosted performance and huge storage and RAM.

Windows laptops are cheaper and fit students who only start their programming careers. You can find such devices starting from $1,000 (or cheaper, but they won’t fully fit exactly programming).

With Windows laptops, you can come across some kind of burden when it comes to updates, drivers, and installers. This OS may make you wait for hours for such updates, while you can run out of time for completing coding. With Mac, such updates are rare and won’t make you wait.

Another important aspect is the user-friendliness of both. For example, by choosing Mac, you will be deprived of using non-mac monitors without buying original adapters. With Windows laptops, you can have a great choice of adapters that may fit without necessarily turning to the Microsoft store.

Now, what about the lifespan of both helpers? To be honest, it is a very common question among users, and there is no right answer. Both Mac and Windows laptops may either serve the same time, be broken at the same time, as well require no maintenance. Everything depends on how you handle your laptop during programming, or how careful you carry them to work or other facilities. If you care about them and organize regular checkups – both may serve you for years.

Those who program also learn about UI and UX designs, and for them, it is crucial to pick the right operating system. You should know that there is some software that fits only Mac-like Sketch, and it cannot be opened with Windows. The same concerns some programs designed for Windows only. As for the quality, and based on users’ experience, graphic designers with a programming focus love Mac. They can see colors better, and run heavy programs without any lags and bags. But, again, it concerns the model you choose to purchase. Recent models released by Microsoft won’t differ much from Mac laptops.

We all know that programming might be a real challenge when it comes to your STEM assignment and homework. Yet, there is a solution, you can turn to an expert service, CWAssignments, for example, for getting computer programming homework help online. Specialists can deal with many programming languages and solutions for both Mac and Windows.