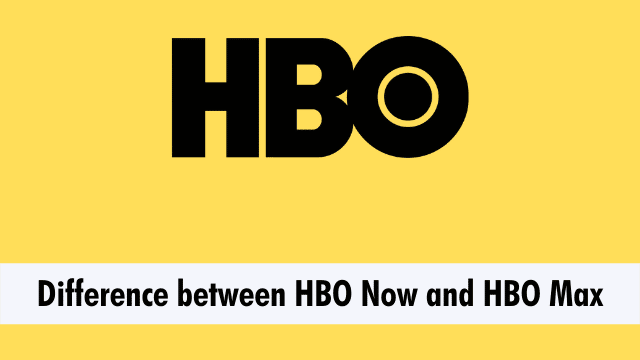 Difference between HBO Now and HBO Max, Streaming services are taking the world by storm. Be it Hulu, Netflix, HBO, every person has a subscription to at least one of these services.

To enjoy using the streaming services you need ultrafast speed internet as well.

There are many premium internet service providers available in the United States. If you plan on compromising on your internet plan, then you will only face frustration while waiting for your videos to stream.

Whenever you are getting your internet connection it is good to once ask the providers about the supported streaming services. If you are an Xfinity user, for instance, you can contact Xfinity customer service number  can get all the guidance about it.

Presently, HBO Max has been quickly making its way on the top of streaming services charts, thanks to it producing constant bangers such as Game Of Thrones and now Friends Reunion?

Whenever we talk about HBO Max in certain conversations people tend to mention it with HBO Now. Does create a fusion in the mind.

They are different, however not so much. We are here to clear this confusion. Let’s get into the difference between HBO Now and HBO Max, so the next time in a conversation, you can sit with clarity.

HBO; Home Box Office is a pay television network in the United States that is owned by Warner Media Studios & Networks and is the flagship product of its parent company, Home Box Office, Inc.

The network’s programming is mostly comprised of theatrically released motion pictures and original television shows, as well as made-for-cable movies, documentaries, comedy and concert specials, and interstitial programming including the making of documentaries and short films.

This was the first television service to be directly transmitted and distributed to individual cable television systems, and it was the blueprint for the premium channel.

HBO operates seven 24-hour multiplex channels along with a traditional subscription video on demand platform, ‘HBO on Demand’, is an enlarged streaming platform run separately from the Home Box Office, but sharing administration, is built around the content of HBO Max.

It features both unique content created specifically for the service and content from other Warner Media assets.

What Is HBO Now?

HBO Now was HBO’s streaming service in the United States. Users could stream directly from HBO, which allowed them not “to” be subscribed to any service, a third-party service, or cable bundles.

As the service was never a part of a cable bundle, you would get billed monthly and had the freedom to unsubscribe whenever you wanted without getting trapped into a contract.

HBO Now was superseded by HBO Max in 2020, May 27th. And the “HBO Now” moniker was abandoned in late July, but the service and app remained available on some streaming platforms such as Roku and certain TiVo subscribers; however, the support brandings for the HBO streaming app was officially terminated on December 17, 2020.

What is HBO Max?

HBO Max, which combines HBO Now and HBO Go, is also a streaming platform for HBO movies and programs. It does not, however, simply offer HBO material; it also includes content from across Warner Media’s collection.

Max Originals, which are exclusive to HBO Max, are also available on the platform. All of HBO’s back catalog is available, as well as titles from other Warner Media networks and brands.

Prices may vary whether you buy it as part of a package or from another provider, according to Warner Media.

What is the difference between HBO Max and HBO Now?

HBO Max is a standalone streaming service offered by HBO today, whereas if we talk about HBO Now, it does not exist anymore due to the merger of HBO Go and HBO Now giving us HBO Max.

Therefore in most circumstances, users who previously used Go or Now can now use their existing account to access Max at no additional cost.

With a few exceptions,  Max is a free upgrade and replacement for those previous services for the vast majority of  subscribers.

HBO Now and HBO Go were different in terms of how you got HBO content: the former was a standalone streaming service, while the latter was part of a cable TV package. They no longer exist, and you can no longer sign up for them.

on the other hand, serves as a stand-in for Now and Go.

Because Warner Media properties are included, it provides a central platform via which members may access material, with a greater collection of shows and movies.