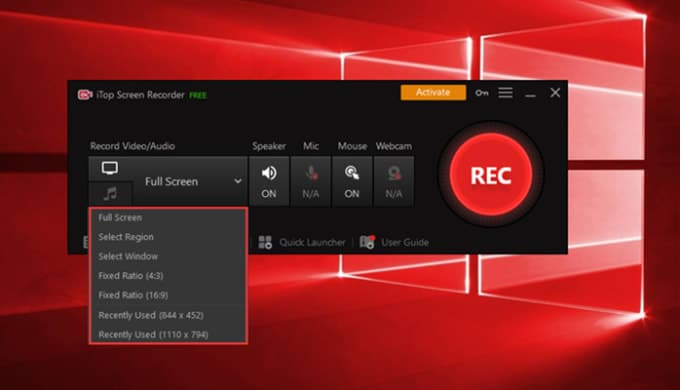 If you want a screen recorder that is working fast, simple, and reliable, there’s one we would like to introduce to you. The name is iTop Screen Recorder; ever ring a bell?

It’s known as one of the most used screen recording software that’s flexible and pretty generous in its free version. It has the essential functions of a screen recorder software but packs tons of useful features, including an introductory video editing feature, high-quality recording, and watermark addition.

The software is pretty flexible in terms of audio recording as well, offering multiple ways to record your audio. You can use your speaker, microphone, or audio input in your webcam. So, it’s also a helpful software to record webinars, lectures, video conference sessions, or even live streams.

There are also tiny bits of extra features which could enhance your recording experience. If you wish to create tutorial videos, there’s an option to enable the cursor and its movements. With it enabled, your audience can grasp your video better.

We previously said the free version is already generous enough with lots of advantages, including no length restriction, no watermark, and the ability to record in a quality condition. The software also has a wide range of output formats.

As we said above, iTop Screen Recorder is an all-in-one recording tool that may give you a lot of usabilities. It works essentially as a program for screen recording but offers other notable features, including a basic video editor and multiple platforms sharing.

The software packs a lot of features that may be beneficial for you, including:

Now you don’t have to record each part separately. Everything is recorded with an iTop Screen Recorder, including the sounds captured through your headset microphone. By clicking record, you can now record everything at once, for instance, record zoom meeting and record YouTube. It’s one of the best online screen recorder for Windows in 2022.

iTop Screen Recorder tries its best to fit in the whole market. It has multiple video formats support, which you can save or convert to another form later. The software also supports the latest devices to the older ones, including the classic MP4 Player.

Want to capture your best moments? Now you may utilize the screenshot feature while recording your screen.

Indeed, you might expect something more from screen recorder software. The iTop Screen Recorder can give you what you wish for. After the recording sessions have finished, you can edit the footage right away using the video editing function of this software. Although it’s basic, you can still get the essentials.

Aside from giving you freedom through a wide range of video output formats, the software can also record your screen at the highest resolution possible. Now you may record your gameplay or other activities on screen at 4K 60 FPS without lags.

Catch the attention of many by creating your videos on multiple platforms. The software itself supports a lot of mainstream formats that you may use for different devices.

You can easily install iTop Screen Recorder on Windows. In order to guarantee the users’ safety, the software also implements data and information security through technical measures to ensure malware risks are mitigated.

iTop Screen Recorder comes in free and paid versions. If you chase the essentials, the free version is more than enough to satisfy your needs. However, you can also get bonuses to increase users’ convenience with the Paid version.