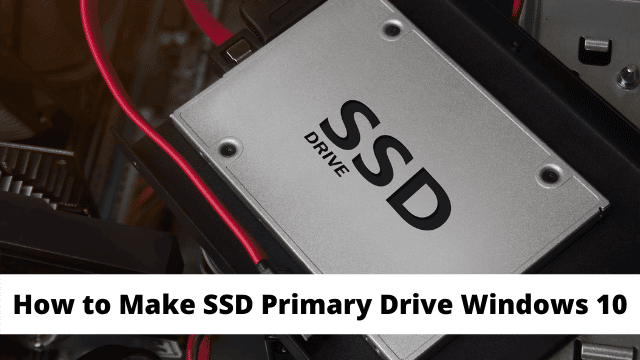 How to Make SSD Primary Drive Windows 10, The way technology is being advancing now a days, for that reason most of the people now prefer to use solid state drives or SSDs instead of any hard disk drives or the HDDs for their computers. Its obvious because, SSDs are way faster, and slimmer, and also a lot quieter than the chunkier and noisier hard drives.

Well after when you have installed your SSD into your computer, then restart the system and now enable the SSD from BIOS. Now From there, migrate the Windows 10 to the SSD using the migration software or you can also do it manually. Whenever finished Restart the PC again and open BIOS for changing the boot order and set the OS to boot from your SSD.

If you are going to buy an SSD for your Windows 10 computer and you are willing to make it your PC’s primary drive, So how do you do that on your own without taking your computer to an expert so he can do it for you?
Here is how:

So, now the first and the most obvious thing you need to do is to make an SSD for primary drive for your Windows 10 computer.

It means that you have to buy an SSD before doing anything else. Keep in mind SSDs might be a lot more expensive than HDDs, but the good news is that they are getting cheaper and cheaper every year.

In that case, make sure that you buy an SSD which is equal to or more than the space which is going to be occupied on your HDD.

If you have eaten up a ton of space already in your HDD, Then this might be a bit difficult for you to do because in that case you need to buy an SSD with a large capacity, which can very expensive.

In that case, for the files that you don’t need, you can back them up in an external disk. That the condition if you can’t afford an expensive SSD which with a good amount of storage space.

Now, you should install the SSD which you bought. You can do that by simply taking apart your computer’s case.

After that, insert the SSD into a spot which is reserved for the drive and then use the one provided connection cables to connect your SSD with your computer.

Well physically, the SSD may have been already installed on your computer but you have to actually install it virtually.

Now Enable the SSD by using the BIOS (we will get there later). For now without getting into the details, you just have to restart the computer to enter BIOS. That is where you can enable your SSD so you can use it for your computer.

Next Migrate Windows 10 OS to your SSD

After you have enabled your SSD in BIOS, you will now be capable of using it as one of your drives on your computer. You will be able to confirm it when you start your computer and after that go to disk management.

If your SSD is available there, It means that you can now use it by storing files in it. However, if you want to use your SSD as your primary drive, So you have to migrate your Windows 10 OS to it.

Now comes The migration part which is the trickiest and the most important part of making your SSD the primary drive for your Windows 10, but this is something which we will talk about later in details so that you can have a better understanding of it.

However, you can also make this step very easy if you just use a third-party migration tool.

After that Set SSD as a boot drive

Whenever you have done migrating Windows 10 OS to your SSD, then restart your computer because now it has to be designated as the primary boot drive even though it has your Windows 10 OS still on it.

Designate it as the boot drive so that your OS will boot from your SSD After that when you turn on your computer.

Set SSD as the boot drive in BIOS

So, as we have discussed, you are supposed to used BIOS whenever you want to not only designate your SSD as the primary boot drive but also you have to install or set it up on your computer after that you have already physically installed it.

First things, which you need to do after you have installed your SSD physically is to restart your computer.

Now you should be able to enable your SSD in BIOS by restarting the computer and by doing the following: first Press F2, F8, F11, and then DEL to enter BIOS > Enter the Setup > Turn on SSD or enable it > finally Save the changes and then exit.

After when you have done that part, Now your SSD should have already been installed on your computer. After that You can confirm it if you see it in disk management after booting up your OS and . However, you are not yet done with the whole process.

After that when you have migrated your Windows 10 OS to your SSD and have enabled the SSD and also completed the installation, what you need to do is to restart the computer again so that you can designate it as the boot drive for Windows 10 OS.

Now restart your computer and then enter BIOS again by pressing F2, F12, and DEL. find the boot option.

From there on, you can change the boot order so you can set up your SSD as the disk where the OS should be booting from. If you don’t do this, the system will try to boot the OS from your HDD even though the OS is no longer inside it.

After that when you have designated the SSD as the boot drive, save changes and exit. Your computer will now regularly boot Windows 10 OS from your SSD as it is now your system’s primary drive.

Transfer Windows 10 from HDD to SSD?

One of the most important steps which involved in setting up your SSD as the primary disk for your Windows 10 computer which is to transfer the OS itself to the SSD.

This can be something which can be pretty tricky without the help of any third-party program or software which make things easy on your part. As such, the best option, in this situation, is to make sure that you use a third-party migration tool.

The Partition Manager is a paid software while the Todo Backup is a free program. If you are looking to migrate your Windows 10 OS to your SSD, you should do good with Todo Backup.

First run the program which you have chosen and then select the Migrate OS option. Here you can select your SSD as the destination drive for the migration process.

You have to make sure that the SSD doesn’t have anything on it because the migration process will erase everything stored in that drive. Now, click on Migrate to proceed with the process.

After that, you will be given a layout of what your target disk will look like after the migration process is done.

But here you can also customize the layout so that you can decide how you need to partition your SSD depending on what you want.

Whenever you are done, now you can click the Proceed option so that the software can start the migration process for you. After that all you need to do is to wait for the software to do its thing.

However, you will also be reminded that the whole process isn’t over after migrating your Windows 10 OS to your SSD.

As we have mentioned earlier, you still need to restart your computer and then use the BIOS to choose your SSD as the boot disk for your OS.

Otherwise, Your system will try to boot the Windows 10 OS from the hard drive even though you have already moved it to your SSD.

Don’t forget to check the detailed steps which we have outlined above so that you will be able to know how you can properly set up your SSD as the boot disk for your Windows 10 OS every time when you boot up your computer.

As we have discussed, making your SSD your primary drive shouldn’t be something way too hard to do. You don’t even need to be very good with computers to figure these things out.

All you have to do here is to make sure that you follow all the instructions so that you can enjoy the fast speeds of your brand new SSD.